This review originally appeared on http://www.whosjack.org in February 2012 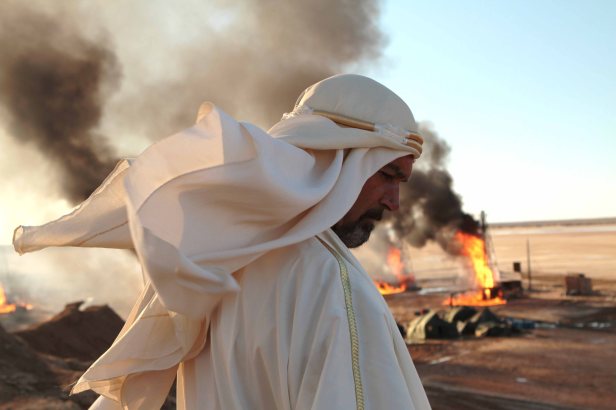 What are you supposed to do when you and your brother have been living with the Emir of Hobeika (Antonio Banderas) for the last 15 years as a peace-keeping measure, and he starts a war with your real dad, The Sultan of Salmaah (Mark Strong) in early 20th century Arabia? This is the problem faced by young, bookish Auda (Tahar Rahim), as the desire for American oil-money causes Emir Nesib to ignore a peace-pact made over a stretch of no-mans land called The Yellow Belt.

Banderas plays the part of the villain admirably, and gets some of the best lines, as he shoots cunning looks and plots and schemes his way to a rather sizeable fortune that must be drilled up from beneath the sands. But he isn’t all bad, as that fortune is being ploughed into turning his kingdom of Hobeika into a modern city, with schools, modern medicine, electricity, and even a big library, which must have been a real luxury, seeing as we’re told that nowhere can afford to run them these days.

The stand-out performance comes from the French actor Tahar Rahim, who made his name as a “one-to-watch” in the superb 2009 crime drama A Prophet. His character Prince Auda is forced to grow up very quickly and shoulder a lot of responsibility, and you really get the feeling that Auda grows in stature throughout the film. Something akin to Peter O’Toole in Lawrence of Arabia, but Auda is more an Arabian Lawrence.

Black Gold was made in cooperation with the Doha Institute of Qatar, and funded largely by Arabian money too. And while there are plenty of lingering shots of the scenic and the pretty, this is by no means as overtly a tourist information video as Baz Luhrmann’s Australia was. Director Jean-Jacques Annaud finds a much more subtle balance here, with some stunning on-location cinematography, intertwined with a story which really draws you in.

There is also room for some rather obvious moralising about the corrupting nature of money, and it is of course a Texan prospector that causes the conflict between the two kingdoms with his offer of cash for oil. While Sultan Amar sees little need for American money and stoically states that there is no value in anything that can be bought, his kingdom is crumbling and his people could do with a few modern comforts. On the other side of the coin, Emir Nesib’s eyes virtually become cartoon dollar symbols when he is told of the oily riches lying beneath The Yellow Belt.

Modernise too much and you lose your cultural heritage. Stand stubbornly by the old ways and you will be considered a dinosaur and your kingdom will fall further behind the Western world. Such are the decisions faced by the ruler of an Arabian province. Not only must Prince Auda navigate such a tricky moral conundrum, but he must be both a diplomat and a leader of men on the battlefield.

Black Gold does make entertaining viewing and is a beautifully put-together film, but it is hindered slightly by occasionally sermonising dialogue about the perils of money and greed. Still, there’s nothing wrong with a film that might make you wonder what the rat-race is all about, and there’s plenty of action to keep us entertained, between dissertations on the problems of modernisation versus retention of cultural heritage.

This site is a portfolio of features I’ve written for print and online publications.

I have covered a wide range of subjects and am often available for freelance work.

You can reach me at thisismarkwilliams@gmail.com